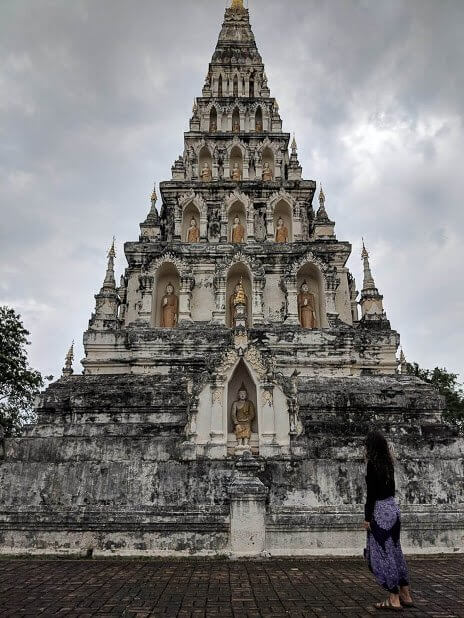 When I visited Chiang Mai, Thailand, my favorite thing to do was to visit its Buddhist temples. There are over 40,000 temples in Thailand and in Chiang Mai, there are roughly 300 or so active temples. The most astonishing thing about the temples was that each one was unique—with vastly different stories and designs.
It’s impossible to see all of the temples in Chiang Mai, but it’s definitely worth the effort to visit a few of the stand-outs. I’ve pulled together a list of the best temples in Chiang Mai, Thailand, and the surrounding areas.
While you’re reading this post, you’ll see some terms that may be foreign to you: 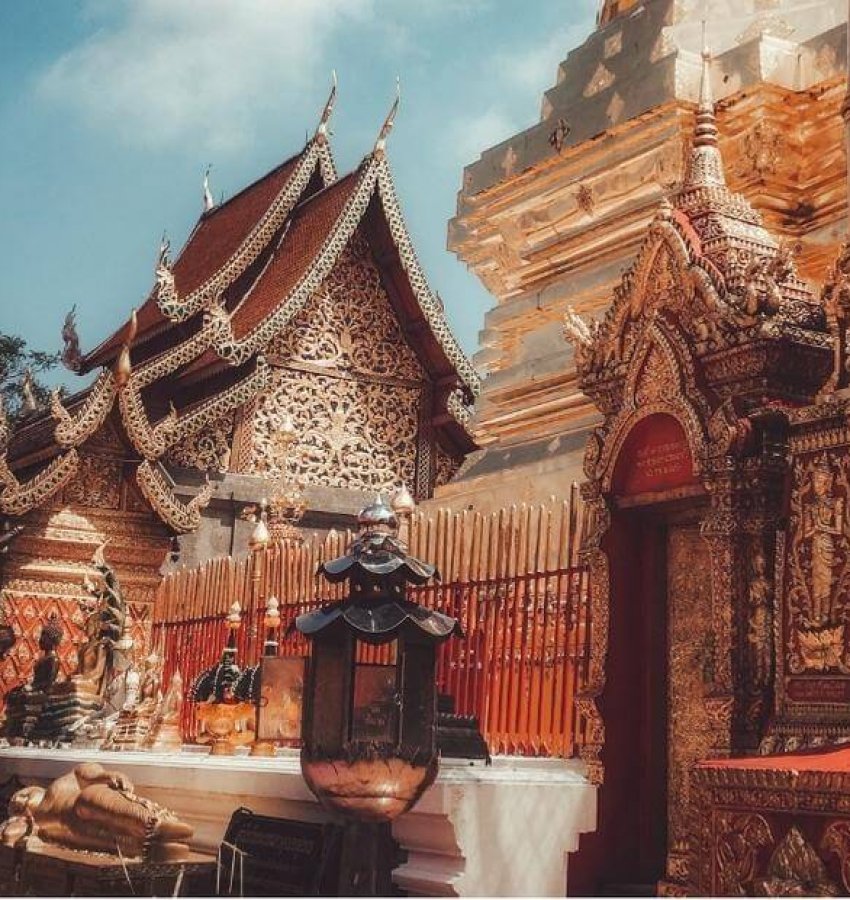 Wat Phra That Doi Suthep is the most visited Buddhist temple in the Chiang Mai area. You’ll also see it referred to as Wat Doi Suthep. The temple and surrounding buildings on the grounds are grand and stunning. The temple is a golden color. You’ll see a lot of use of the gold color in Thailand. Buddhists believe that gold is a symbol of happiness, knowledge, enlightenment, and purity.

When visiting the temple, guests can observe the many buildings on the grounds. Because the temple is located on the top of a mountain (Doi Southep Mountain), you can catch some great views of Chiang Mai from above from the area. My favorite thing about Wat Doi Suthep is that you can receive a personal blessing from a monk, which is a really special and unique way to experience the Buddhist practice. 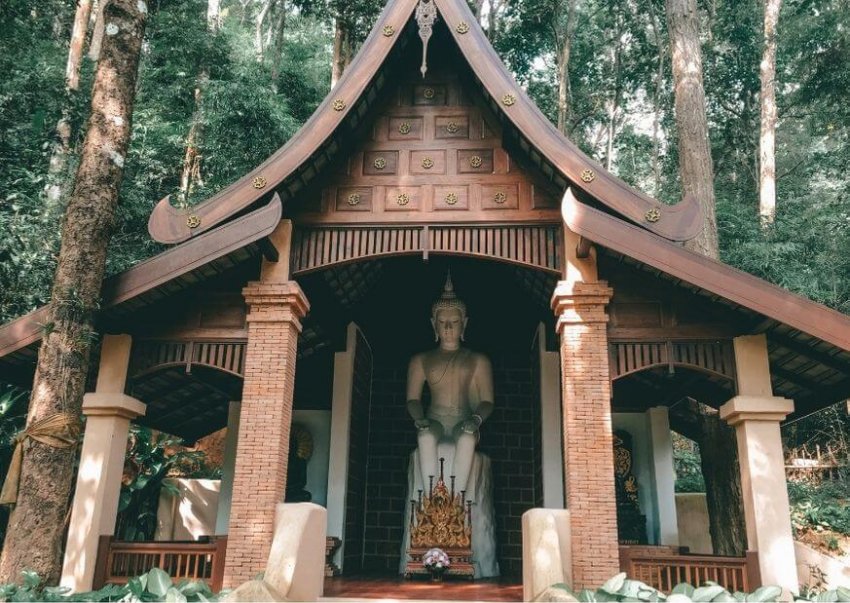 Wat Pha Lat is one of my favorite temples in Thailand. I love this temple so much because it’s somewhat hidden within a jungle. Visitors have to hike up a mountain, through an incredible and serene path to get there. The hike (called the Monk’s Trail) was one of the most unique hikes that I’ve ever been on. Orange garments from monk robes line the walkway to direct visitors to the temple. It takes about 40 minutes to walk the trail one way. The temple is nestled at the top of the trail and the area/grounds are beautiful. It’s a great area to stop, take in the surrounding jungle, reflect, and relax.
The temple was built in 1355, like many other Buddhist temples in Chiang Mai. The name Wat Pha Lat means, “monastery at the sloping rock” because of the rock formation that it’s situated on. The temple was built to serve as a rest-stop for Buddhist monks during their pilgrimage to a larger temple located deeper in the jungle. In 1935, the temple became a meditation site for monks.
I 100% recommend the Monk’s Trail and a visit to this temple. It’s a great escape from the bustling city of Chiang Mai. There were hardly any people on the trail/grounds when I went. If you do go, be prepared to see lots of tiny snakes and spiders, which are harmless but do line the monks trail path. 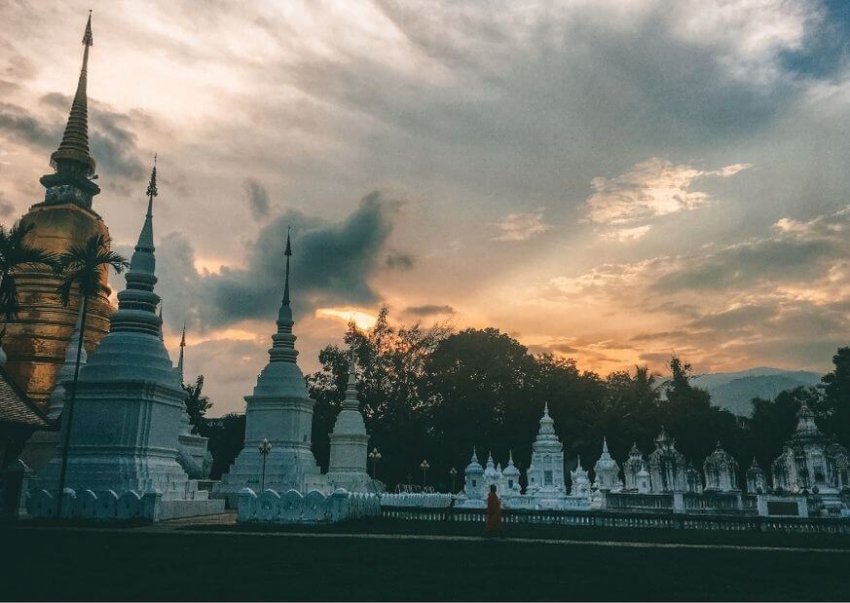 The temple is located on the outskirts of Chiang Mai city, near the University and Niman area. It was originally built to be a retreat center for monks in the 14th century. Wat Suan Dok is translated to “flower garden temple” and is known for its large stone monuments and floral offerings that are often left beside it. Visitors can walk through the white stone structures, or peek into the temple. 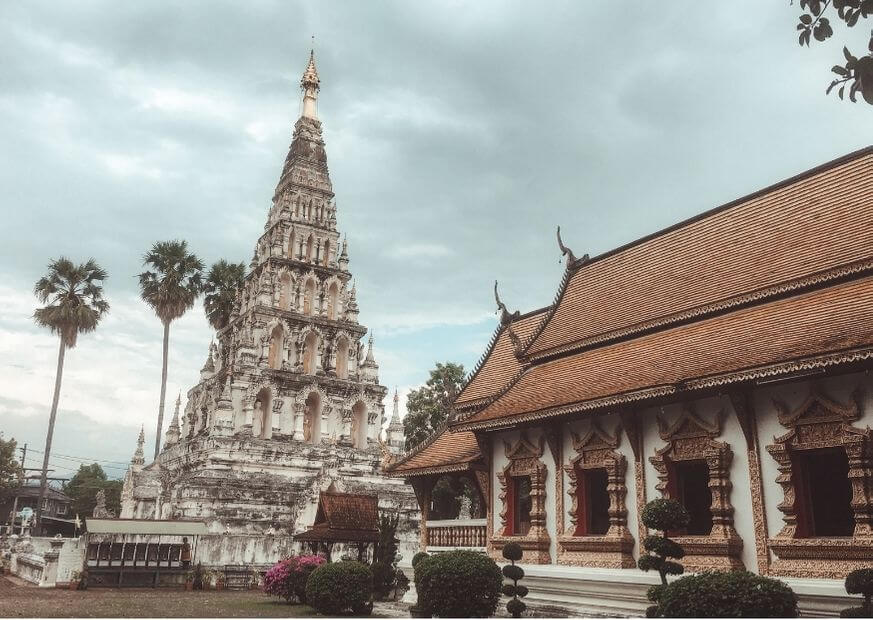 Wat Chedi Liam is one of the prettiest temples in Chiang Mai. The temple was built in the year 1287 and was originally a residence for the then king of Thailand. The five-tiered Chedi (white-structure located outside of the temple) is guarded by stone lions. There are 60 Buddhas sculpted into the Chedi, displaying various hand gestures. The Buddhas are said to commemorate the 60 wives of the King of Thailand.

A visit to this temple will be quite fast, as there are only a couple of architectural sites to see and not many activities to participate in on-site like with some of the other temples in Chiang Mai—but it’s well worth it. The temple has a unique story and is super grand in person. Visitors can allocate about an hour into their itinerary for a visit to the temple.

Wat Chedi Luang is one of the most historic temples in Chiang Mai. It’s one of those structures that you can look at and really feel the history when standing in front of it. The temple was built in the 14th century, by King Saen Muang Ma, 8th ruler of the Mengrai dynasty. Wat Chedi Luang was not originally meant to be a temple but rather, was built to house the ashes of the king’s father, Ku Na. A relic called The Emerald Buddha was housed on the grounds—making it a very important Buddhist landmark.

The monument was damaged in an earthquake in 1545. The emerald buddha remained in the temple for 6 years after the earthquake but was then transferred out for safekeeping. In the 1990s, UNESCO restored the structure and added elements to help preserve it in the future.

From 6-9 PM daily, visitors can experience a Monk Chat, under a tree on the grounds. Monk Chats are offered at various Buddhist temples throughout Thailand. In a Monk chat, guests can ask Monks questions about anything they’d like.

Wat Phra Singh is located in Chiang Mai’s Old City. The temple was built in 1345 and restored in the early 19th century. It’s considered to be one of the most visually appealing Buddhist temples in Chiang Mai. The temple is sometimes referred to as, “The temple of the Lion Buddha”, which is the name of the Buddha idol in the temple. The name “Lion Buddha” comes from the fact that before Buddha became, “the Buddha”, he was a part of the Shakya Clan, and their symbol was the lion.
There are a few structures on the grounds. There’s the main temple; which features intricate decoration on its rooftop and throughout the temple (inside & out). There are also stupas and pagodas scattered around the temple. Visitors can peak into the temple, or enter into the surrounding structures to observe. 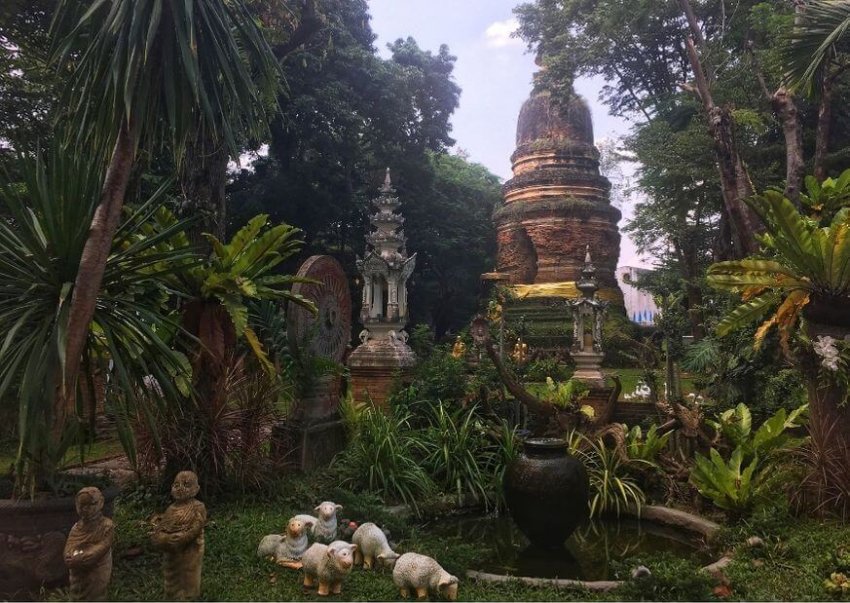 Wat Pan Sao is one of the cutest temples in Chiang Mai. It’s a smaller temple and located a bit “off the beaten path”, so not as many tourists visit it. I found the temple and structures on the temple grounds to be more eclectic and varied than other temples in Chiang Mai, which I liked. The sights to see include: the temple, a Chedi, and gardens with cute and unique statues of various animals and Buddha’s scattered throughout. There’s also a cafe located in front of the temple that visitor’s like to chill out in.

It’s a simple temple, but I experienced it to be one of the best temples in Chiang Mai due to the serenity that I felt there due to the lack of other visitors and aesthetic, as well as the nearby cafe.

Below are my top 2 favorite temples that are not in the Chiang Mai region, but rather, accessible via day-trip from Chiang Mai. These are located in Chiang Rai and Pai, respectively, and are each about a 4 hour drive to/from Chiang Mai. 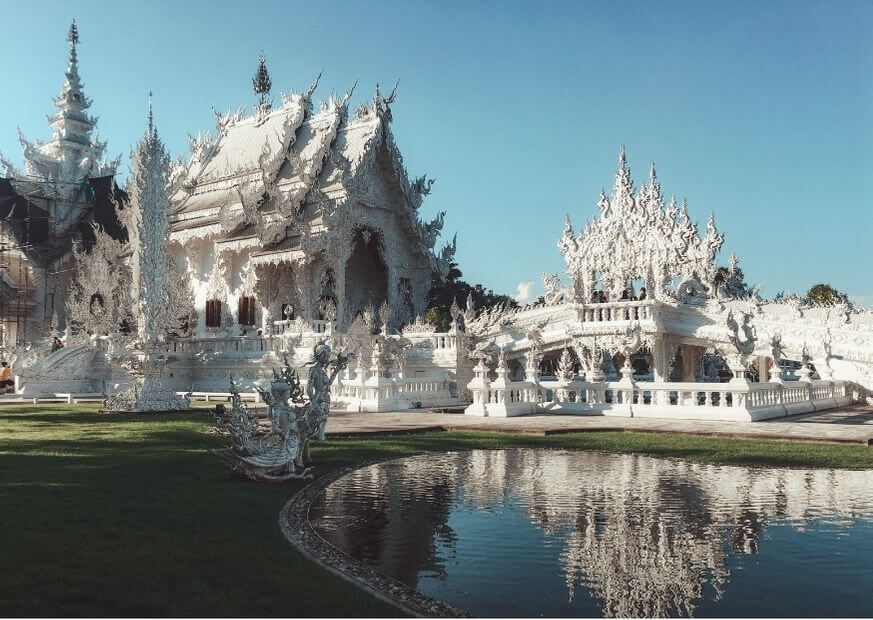 Wat Rong Khun (also known as the White Temple) is located in the Chiang Rai district of Thailand. It’s quite far from Chiang Mai, but many like to visit the temple on a day-trip. The drive to/from Wat Rong Khum is about four hours each way when coming from Chiang Mai. The trip there is long but so worth it. Wat Rong Khun is hands down, one of the coolest temples within driving distance of the Chiang Mai area.

The design of the temple is very intricate and different than what you’d expect to see at a Buddhist Temple. The temple was designed by a local artist named Chalermchai Kositpipat. The temple is inspired by the orthodox Buddhist teachings about heaven, hell, karma, and earthly sins. There are unexpected art displays woven into the architecture, such as hundreds of ceramic hands grasping out of the ground, as if they were hands of humans reaching up from hell.

The grounds contain nine buildings; which include a temple, a “hall of relics”,  a meditation hall, an art gallery, and living quarters for monks. The site is currently active, like many of the temples in Thailand, and we saw several monks walking around the grounds while we were there. 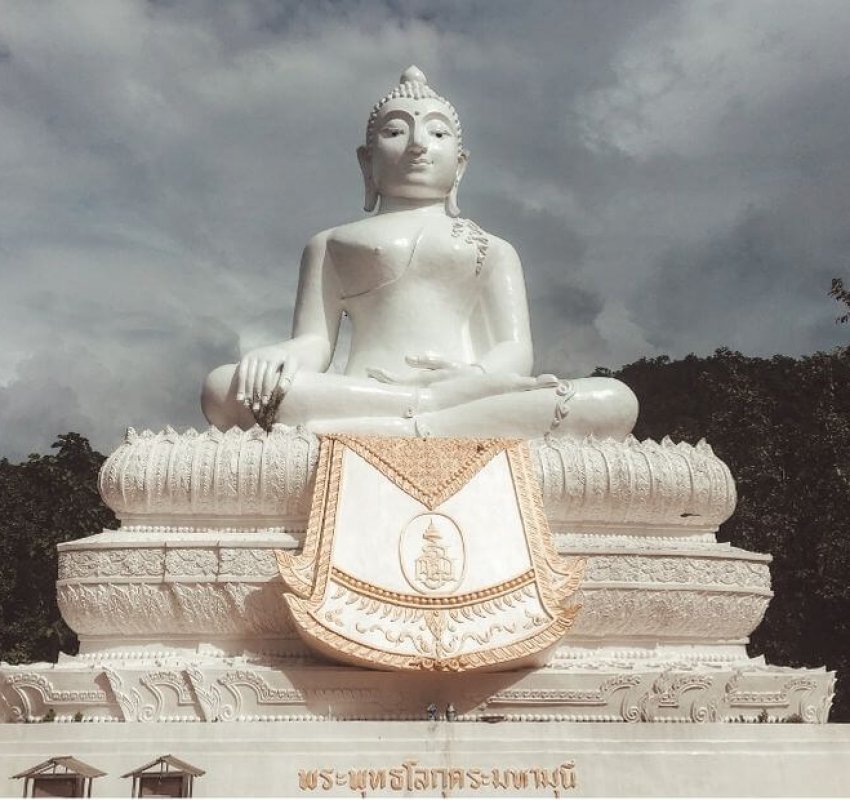 Chedi Phra That Mae Yen is in the Pai district of Thailand. Pai is approximately a 4-hour drive to/from Chiang Mai. Pai is the coolest town that I visited in Thailand, and it’s worth considering spending a few days in the area. If you’ve got a short itinerary, then a day-trip is do-able.

The temple sits on top of a large staircase. At the top of the staircase is an enormous white Buddha statue; which is visible from several parts of Pai. The best times to visit the temple are during sunset or sunrise. If you’d like to avoid the crowds, then sunrise is the best time to head to the temple so that you can enjoy the temple with great views, excellent natural lighting, and silence.

The temples listed on this page are what I consider to be the best Buddhist temples in Chiang Mai, Thailand and the surrounding area. There are hundreds of incredible temples in Chiang Mai and this list barely braises the surface but serves as a great jumping off point for all those that would like to explore these architectural and historical gems in Thailand.