Huacachina Desert Oasis is the largest sand dune in South America, located four hours south of Lima, Peru in the Ica region. Much like other areas in Peru, the area boasts a unique and beautiful landscape, made up of both a desert and a lagoon. People like to visit Huacachina because of the combination of its terrain—which is uncommon—and the activities available there, which are rarely offered elsewhere in the world and are a lot of fun. Some popular things to do in the area are to go on a dune buggy tour and to go sandboarding down the desert dunes.

This article breaks down how to take a trip to Huacachina, including how to get there from Lima and what to do once there. 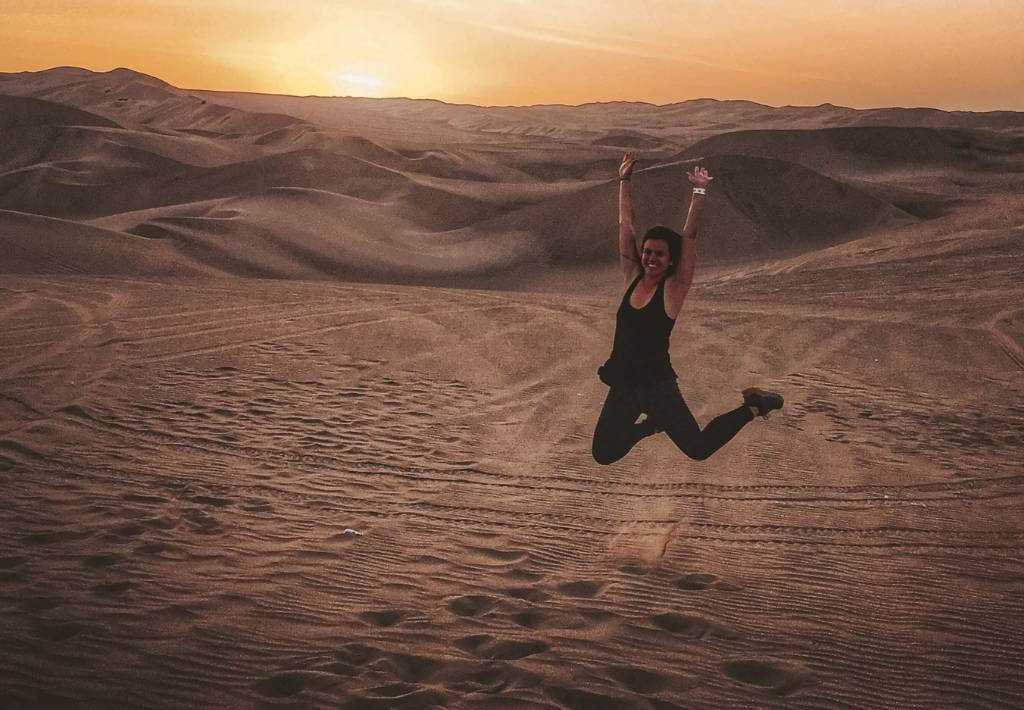 In the center of the Huacachina Desert Oasis is a lagoon that’s skirted by palm trees. Around the lagoon is a town that’s full of hotels, shops, restaurants, bars, and nightclubs. The lagoon looks man-made because it’s so different than what one might expect to see in a desert, but it’s 100% natural. The trees that line the lagoon are there to preserve its shape, and they also add to its visual appeal.

Huacachina was first inhabited by different indigenous cultures, including the Quechua. In the 1950s, it became a resort for Peruvians. In the 1990s, more hotels and shops were built around the lagoon in order to make it an international tourist attraction. Today, Huacachina is one of the most popular tourist attractions in Peru.

How to get to Huacachina 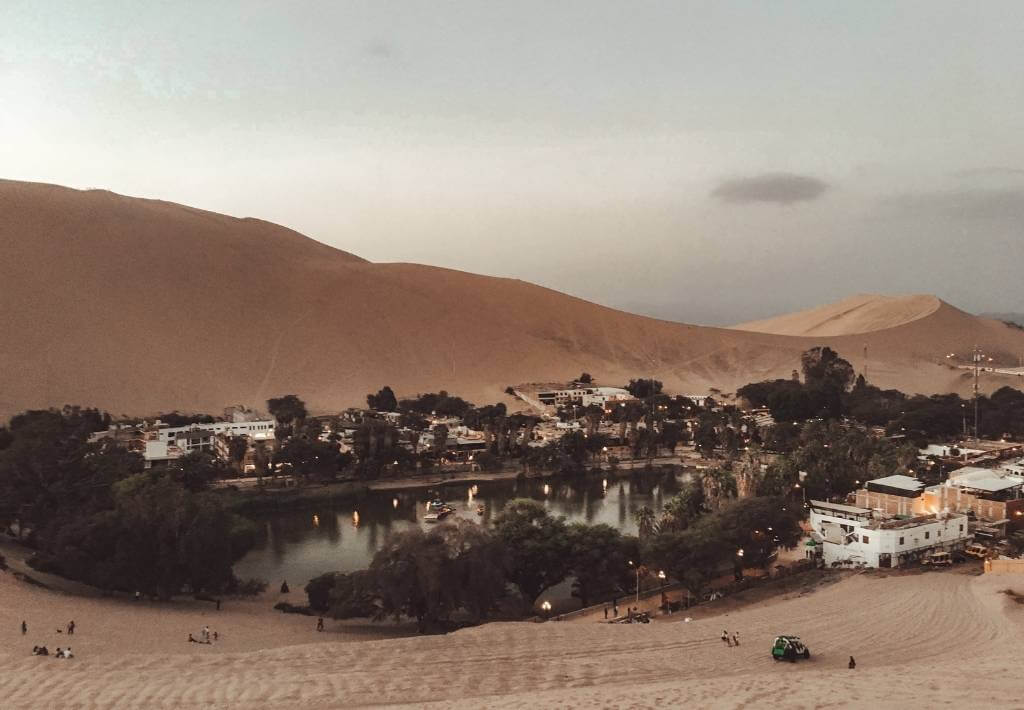 There are a few bus options to Huacachina from Lima. One of the best bus companies in Peru is Cruz Del Sur. They offer daily trips from Huacachina to Peru and have affordable, safe, and comfortable buses. Ticket prices vary based on time of day and season, so check their website for the most up-to-date information. They offer “standard” tickets and “VIP” tickets. The VIP ticket will get you a more comfortable chair that reclines and some extra snacks for the trip. Cruz Del Sur will stop in Ica, and from there, you can take a public taxi from the bus stop to the Huacachina Desert Oasis.

Another popular busing company in Peru is Peru Hop. Peru Hop offers tours throughout all of Peru. This option is recommended if you’d like to visit several cities throughout Peru via bus. One of the routes that Peru hop takes is to go from Lima to Huacachina. Peru Hop is more expensive than Cruz Del Sur but is ideal if you’re planning to see a lot of Peru and want to do it with one, consistent company. Peru Hop will take you directly to the Huacachina Desert Oasis.

What to do in Huacachina 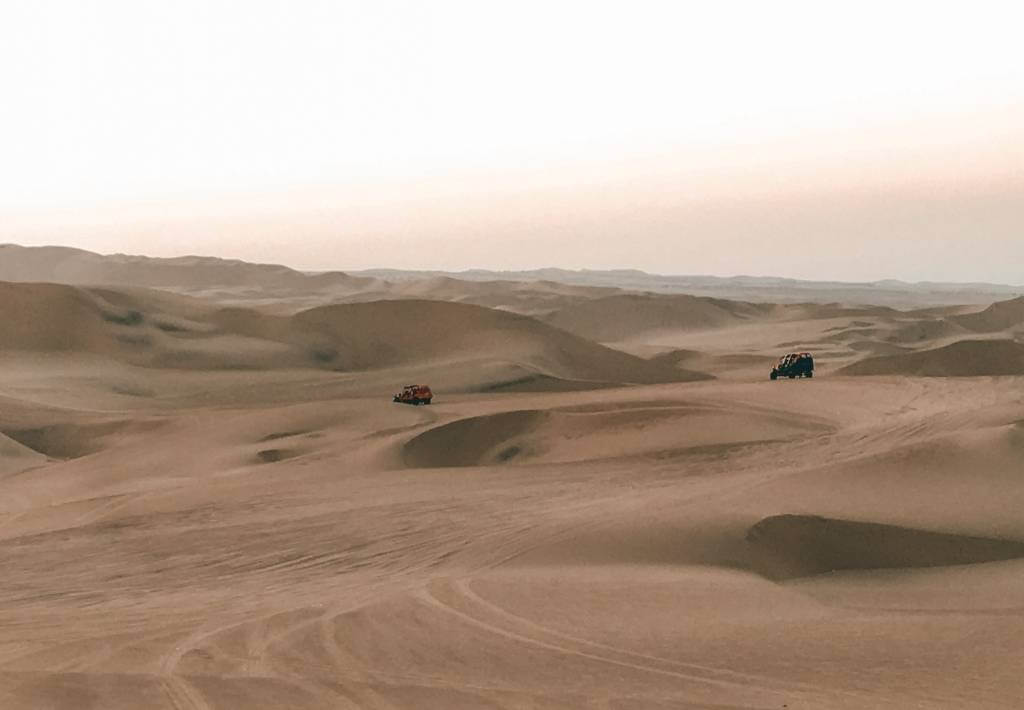 What to Pack for a Trip to Huacachina 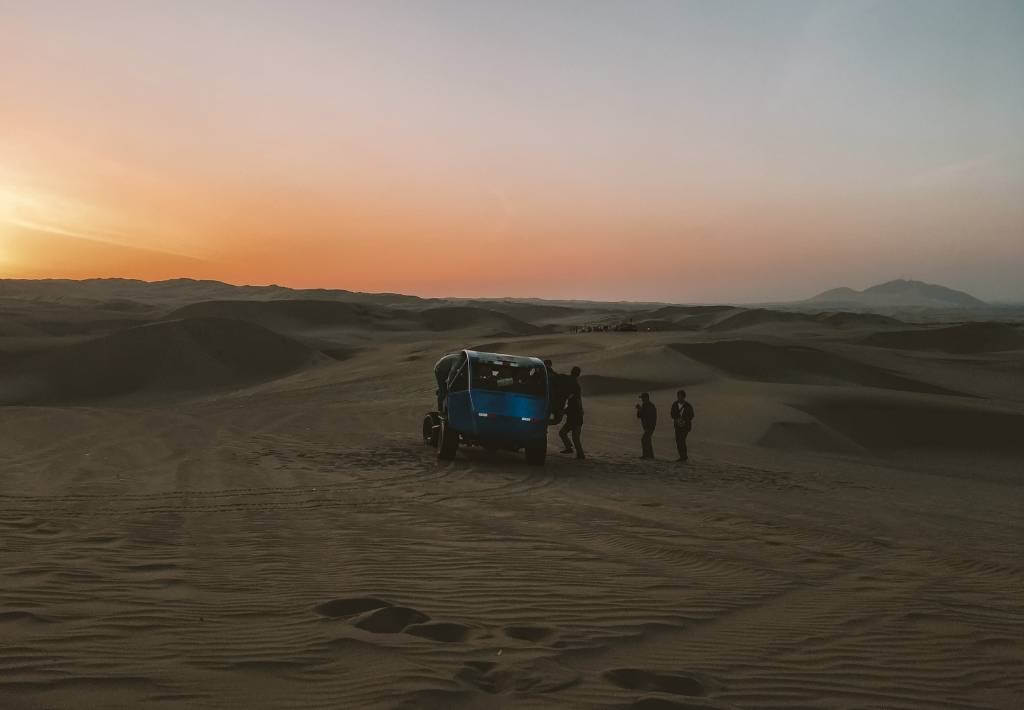 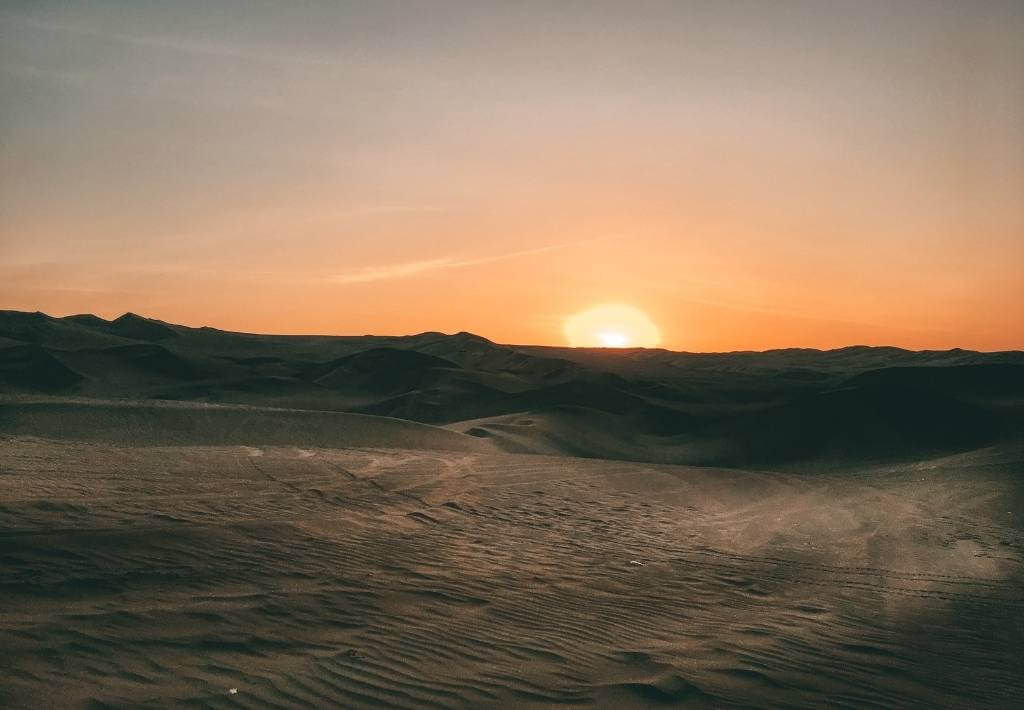 There are accommodations in both Huacachina and Ica. If you stay in Huacachina, you’ll have great views of the Oasis and will be near where the sandboarding & dune buggy tours depart. The benefit of staying in Ica is that the accommodation costs are usually lower than in Huacachina. If you stay in Ica, you’ll have to take local cabs to/from Huacachina which will add to your cost.
There are tons of great hotel options in the area, here are some favorites:

Enjoy Your Trip to Huacachina! 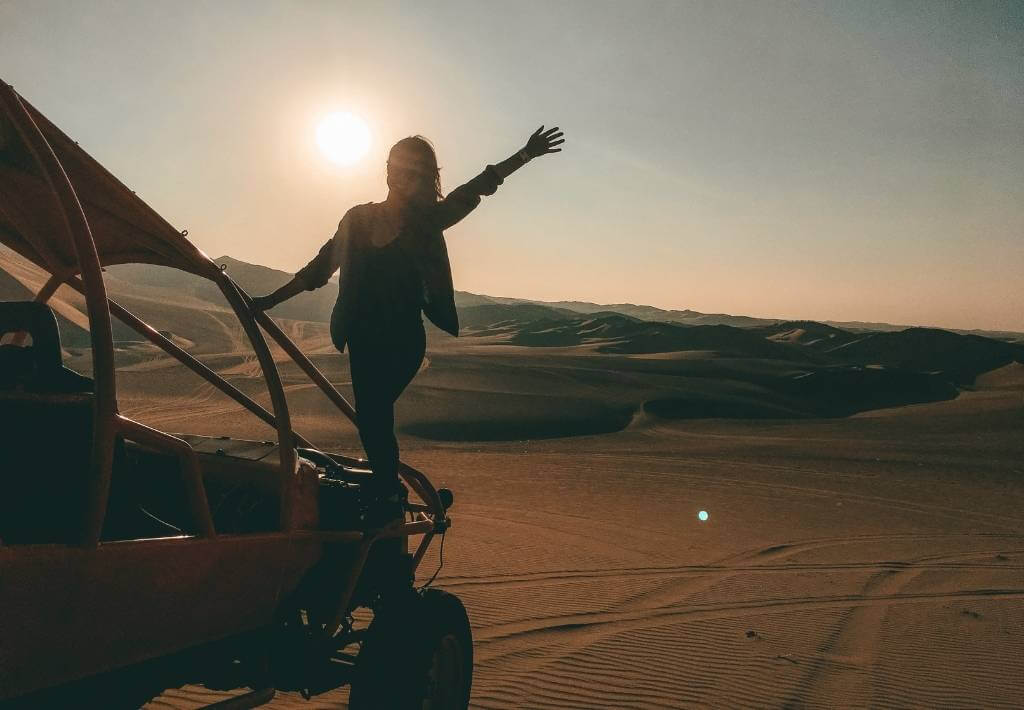 Huacachina Desert Oasis is one of the most fascinating places that you can visit. It’s unique terrain looks even cooler in person than it does in the pictures and the activities that you’ll do there such as going on a dune buggy tour, sandboarding, and learning how Pisco is made will be fun & memorable.

If Huacachina is a stop on your itinerary during a trip to Peru, then check out some of the articles below for advice for some additional places that you might visit during your stay. A great stop on your journey would be to visit the Paracas National Reserve, which is about 1.5 hours away from Huacachina, and en route from Huacachina to Lima.

Read More Inspiration for a Trip to Peru 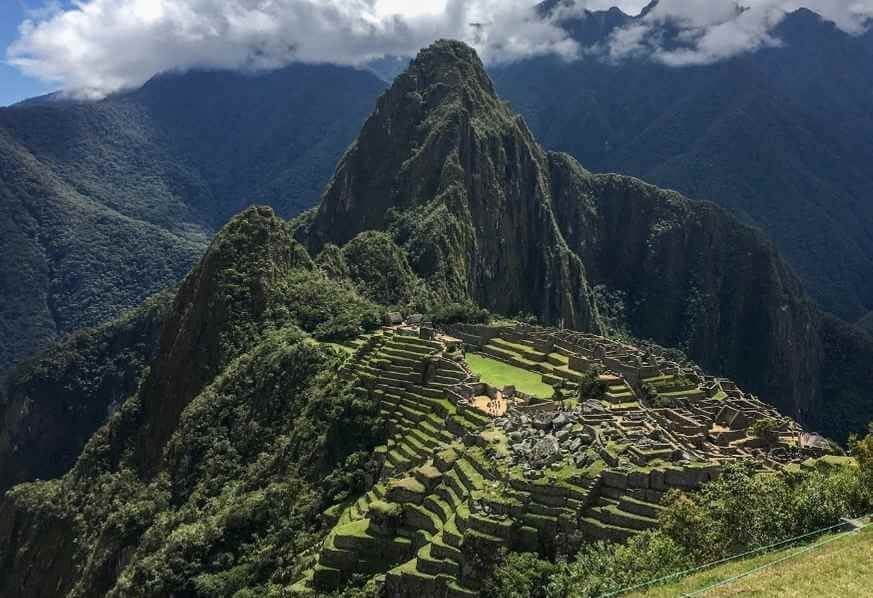 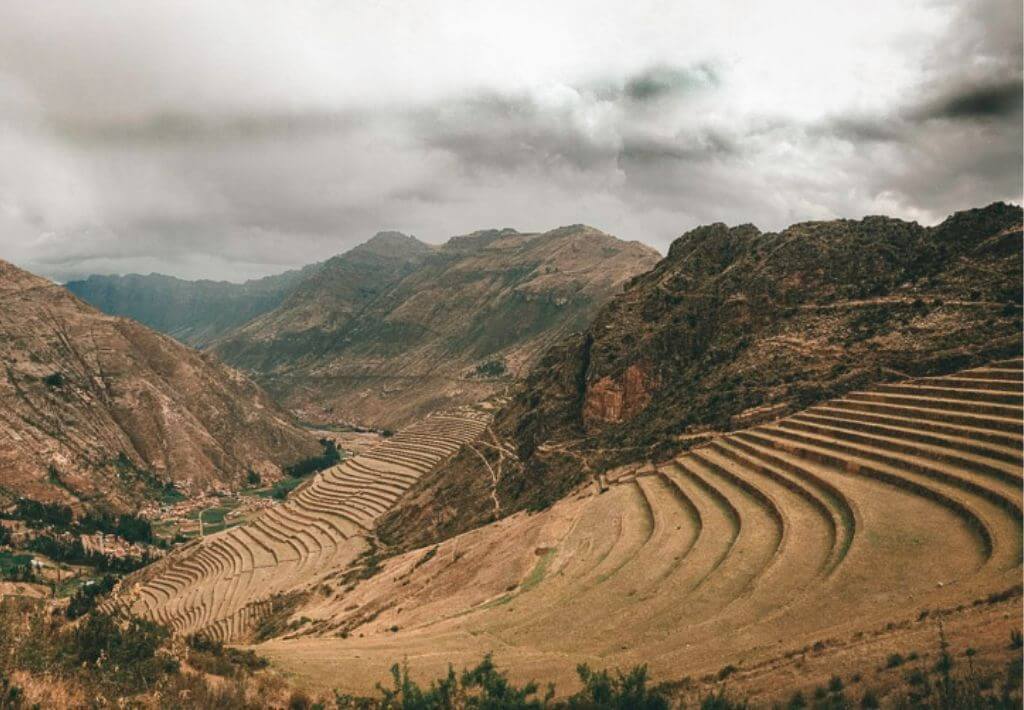 Rainbow Mountain Hike in Peru: Tips for a Successful Trek

Hiking to Inti Punku: The Sun Gate at Machu Picchu 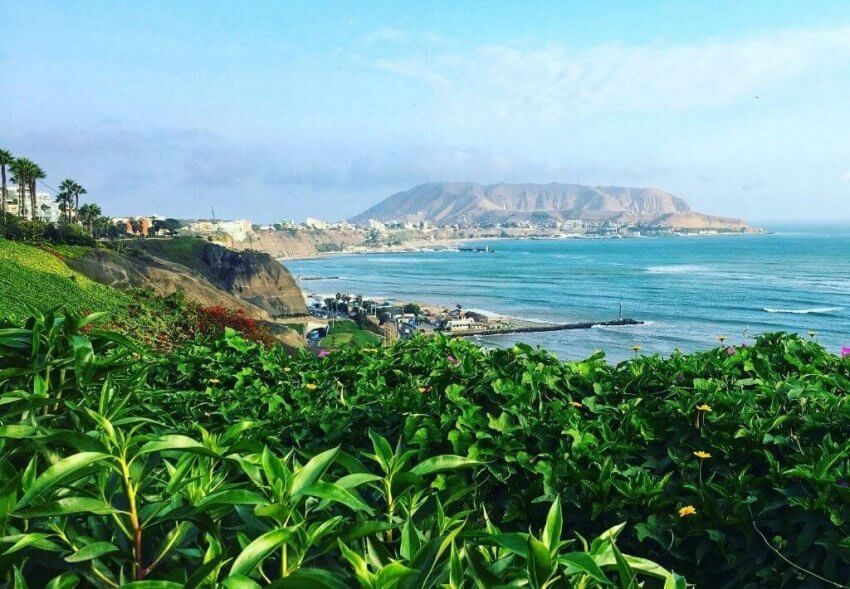 Where to Stay in Lima, Peru: The Best Areas & Accommodations (2021) 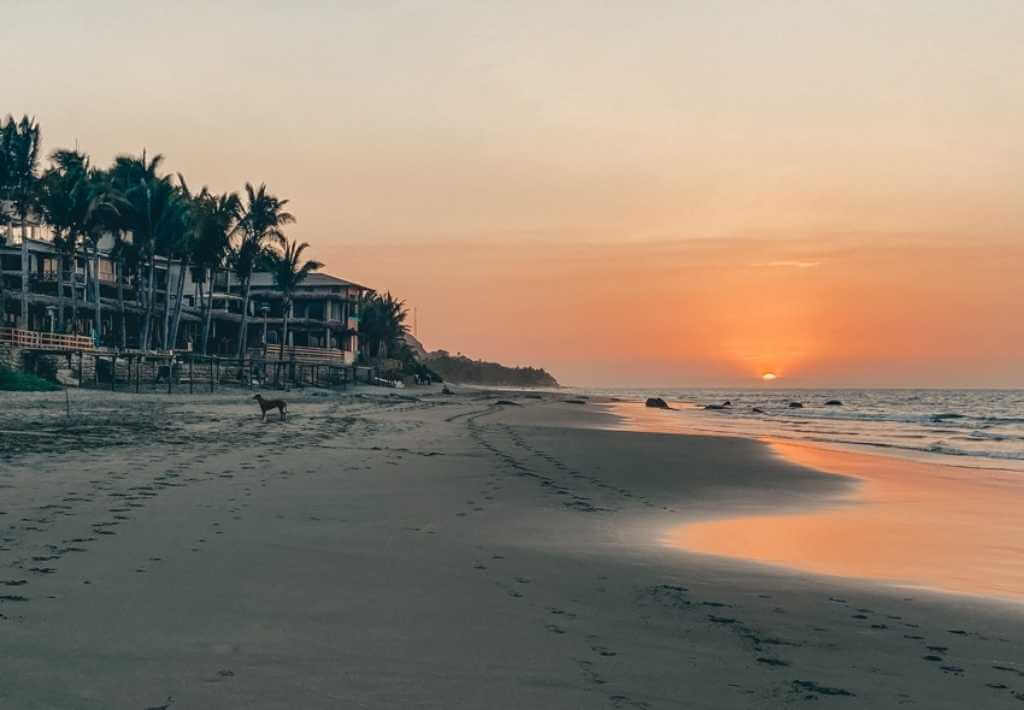 Visiting Mancora, Peru: What to See, Know, & Do