Skip to content
Cuenca, Ecuador has been the biggest surprise to me thus far in my travels. I expected Cuenca to be much like the other South American cities that I had visited in the past—and it is, but it’s a bit European, too. Its European influence comes from Spanish settlers that established Cuenca in the 16th century.
The city is set in the Andes, which provides a beautiful backdrop from every vantage point. In Cuenca, there’s an infusion of European and Ecuadorian food, architecture, and activities. The architecture of the city is also cool—the streets are lined with Spanish Colonial-style buildings that were first built in the 16th century.
The diverse cultures and jaw-dropping landscape that surround the city make Cuenca one of my favorite cities in the world. I plan to go back because, in addition to there being a lot to do in Cuenca, it’s also one of the best cities in South America for Digital Nomads. Below, you’ll find a list of my top 10 things to do in Cuenca, Ecuador—the list includes my favorite Ecuadorian architectural sites to see, activities to participate in, and local foods to eat. 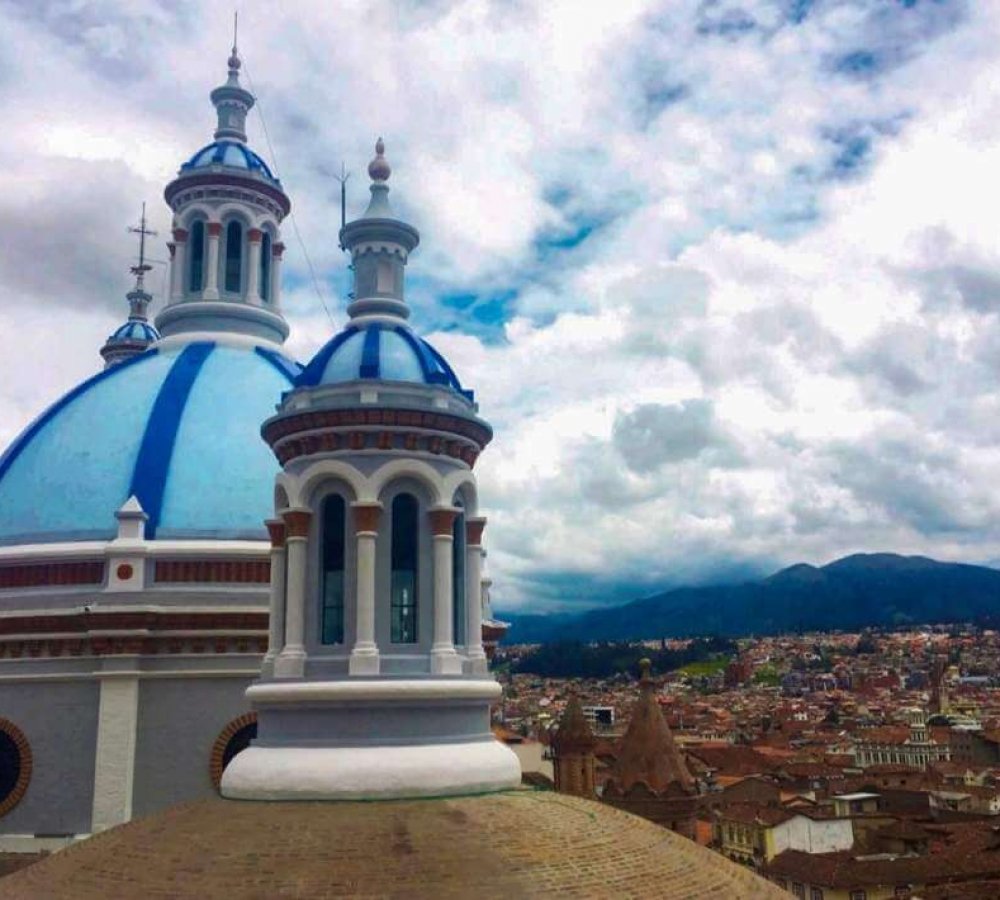 Visiting the Interior of the New Cathedral

For a small fee, guests can take a tour of the New Cathedral Towers. I highly recommend this, as the views from the top are incredible (and offer great photo opps!). The tour will talk you through the Cathedral’s history, and then grant you access to a terrace that’s located on the roof of the Cathedral. Guests have to walk up a flight of 150 steps to access the terrace. From the terrace, you will see Parque Calderón and the surrounding areas of the city.

2. Learn about Cuenca's Religious History at the Old Cathedral 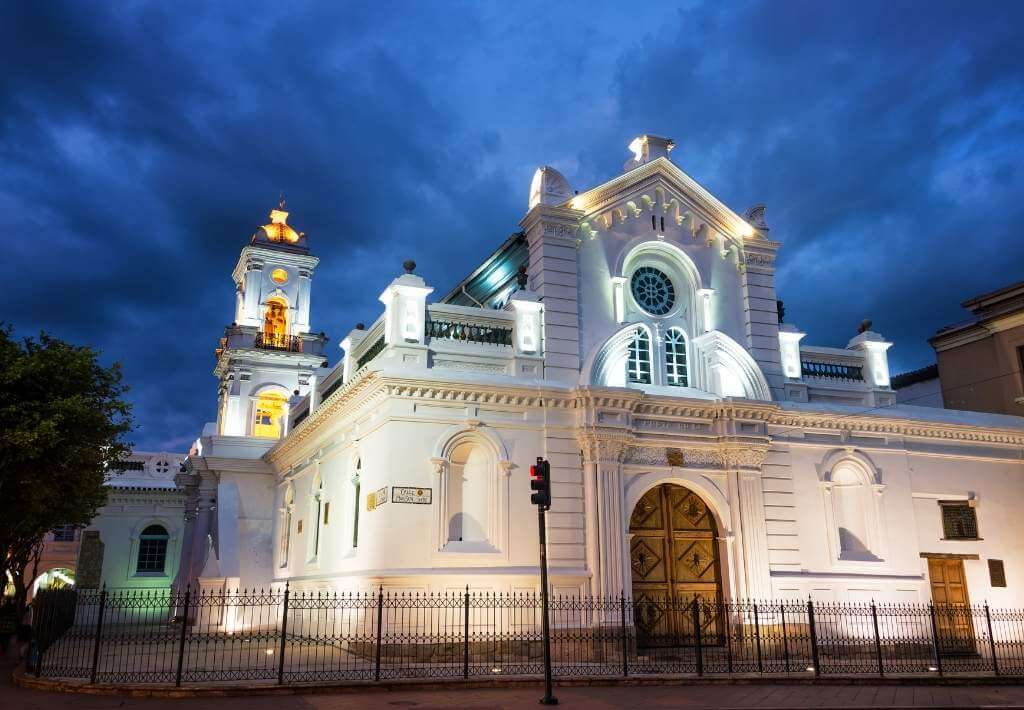 The Old Cathedral (Church of the Old Shrine) is located next to the New Cathedral, near Parque Calderón. The Church was established in 1557, which is the same year that Cuenca was settled by the Spanish. The Old Cathedral was once the central place of religious worship for the city but it’s no longer active today. Now, it functions as a Museum for Religious Art. The museum is open for those who are interested in exploring within its walls and learning about the history of religious practice in the city.

Check out The Old Cathedral’s Facebook Page for information regarding current fees for entry & hours of operation.

3. Look at Cuenca from Above from Turi Viewpoint 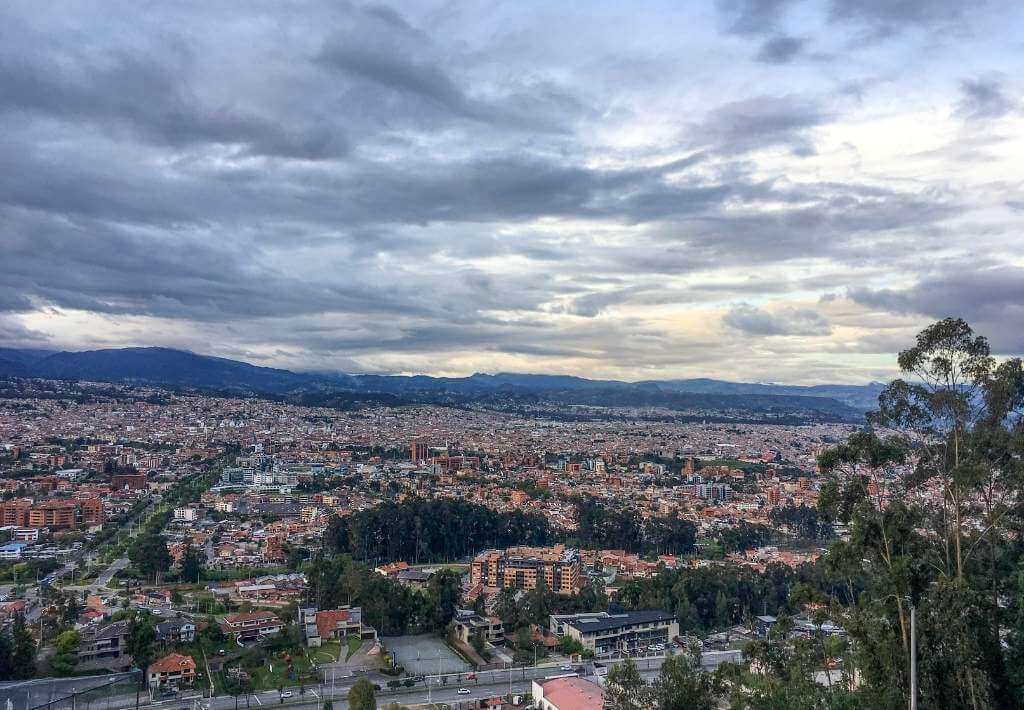 Turi Viewpoint is accessible from the historic center of Cuenca via a quick and affordable cab ride or bus ride. I highly recommend a visit to Turi Viewpoint, as it gives visitors the ability to see the Cuenca city-scape in it’s entirely from above. It’s a stunning view and will make you really appreciate the city. There are also quite a few great restaurants and churches that visitors can check-out in the area.

Dusk is a great time to visit Turi Viewpoint as the sunset looks beautiful over the city. It’s advised to leave before nightfall, as there is said to be increased crime in the area at night.

4. Learn about the History of the Panama Hat at Museo del Sombrero 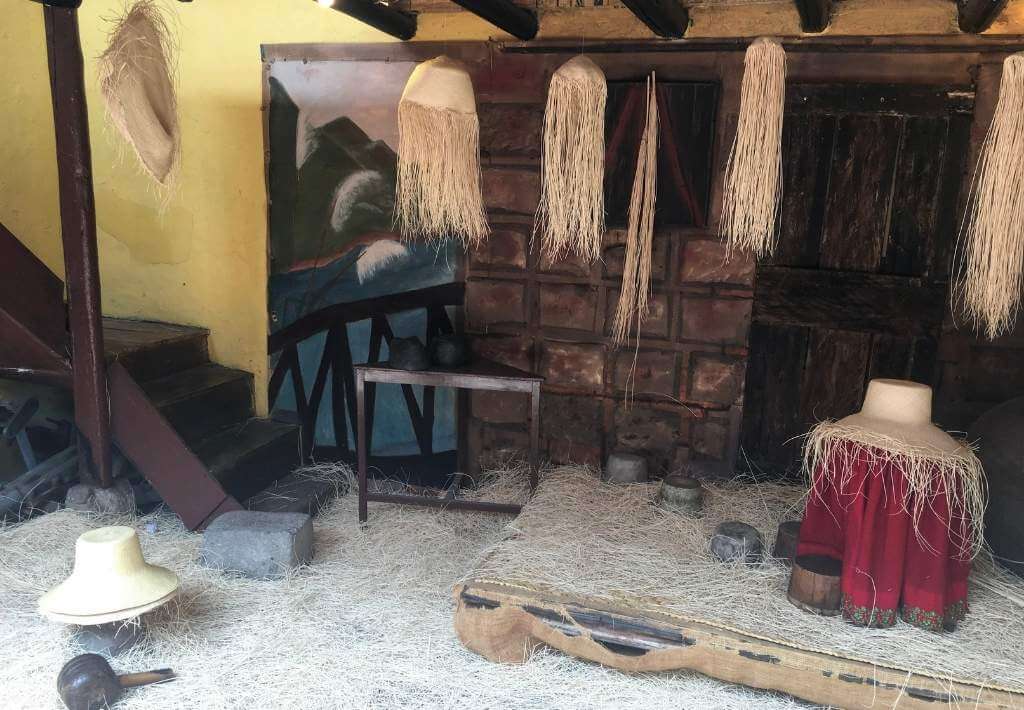 Visitors of The Museo Del Sombrero can go on a historic tour to learn about Panama hats and see replicas of the first machinery used to produce the hats.

After visitors are done touring the museum, they’re invited to purchase locally-made Panama hats of their own. If you don’t want to purchase a hat, then the museum/store also welcomes you to try them on for a photo opp.

For details on museum/store hours of operation, visit the Museo del Sombrero website.

5. Spend Some Time Relaxing Along the Rio Tomebamba 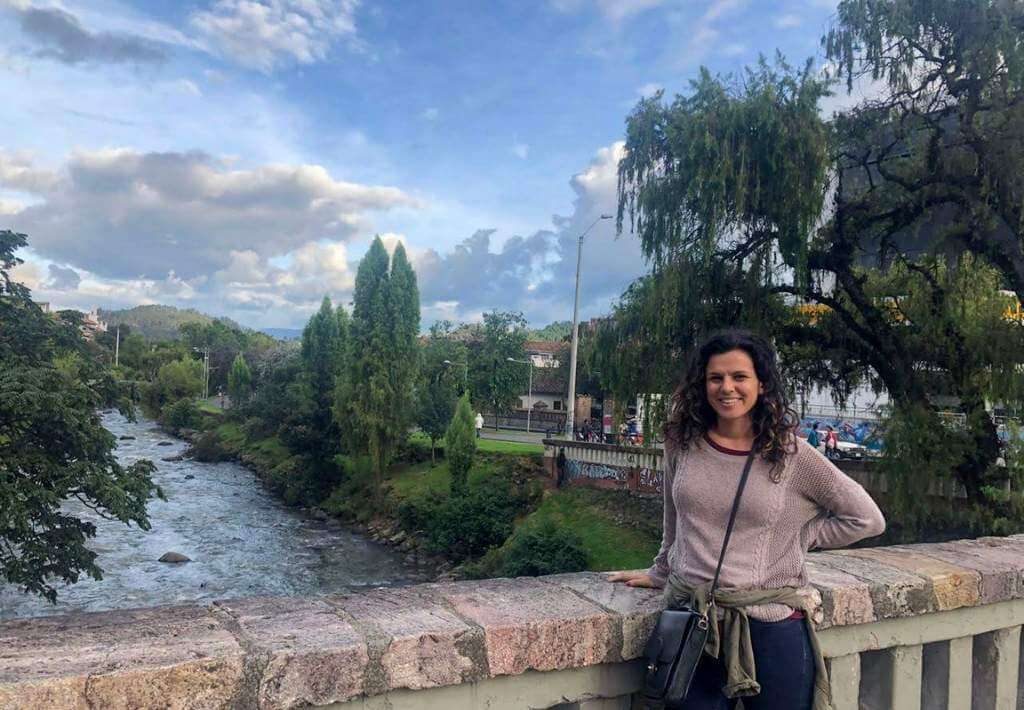 The Rio Tomebamba streams throughout Cuenca, Ecuador. The water from the river connects with the Amazon River & the Atlantic Ocean.
It’s possible to walk along the river or ride a bike along a nearby pathway. There are restaurants and cafes lining the river that offer great views while dining. During my visit to Cuenca, I spent some time relaxing at Break Coffee and Art, and it was lovely.

Ecuador sells some great locally made items in their markets. The markets are geared towards the locals, rather than tourists, so visiting one will expose you to real Ecuadorian culture. The markets sell a wide variety of items: including Panama hats, straw baskets, and hand-made jewelry. You can also grab food & drinks in the markets—including fruits, vegetables, bread, sweets, and nuts.
There are markets all over Cuenca on varying dates/times. The two most popular markets are a market that opens in the Plaza de San Francisco on weekends, and the Plaza Rotary Market. 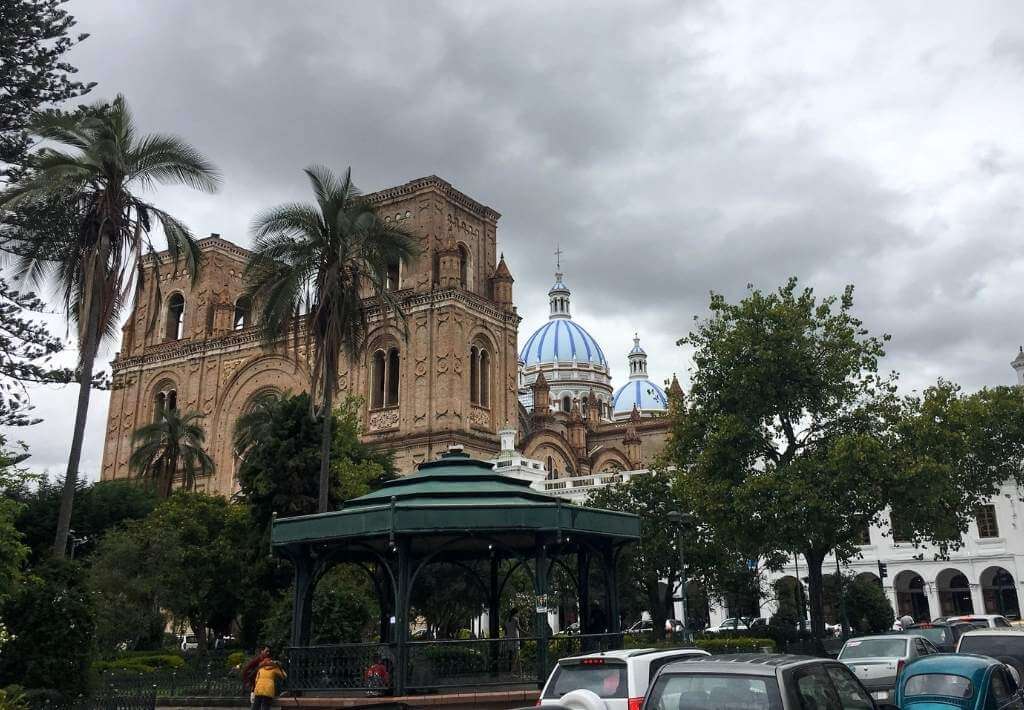 Parque Calderon is a small park in the center of Old Town, Cuenca— located near The Old Cathedral and The New Cathedral. The park spans about one city block and is a hub for a lot of random activities, such as pop-up markets and concerts. The park also serves as a meeting space for many tour groups, since it’s so central and recognizable within the city.

8. Stroll through the Flower Market 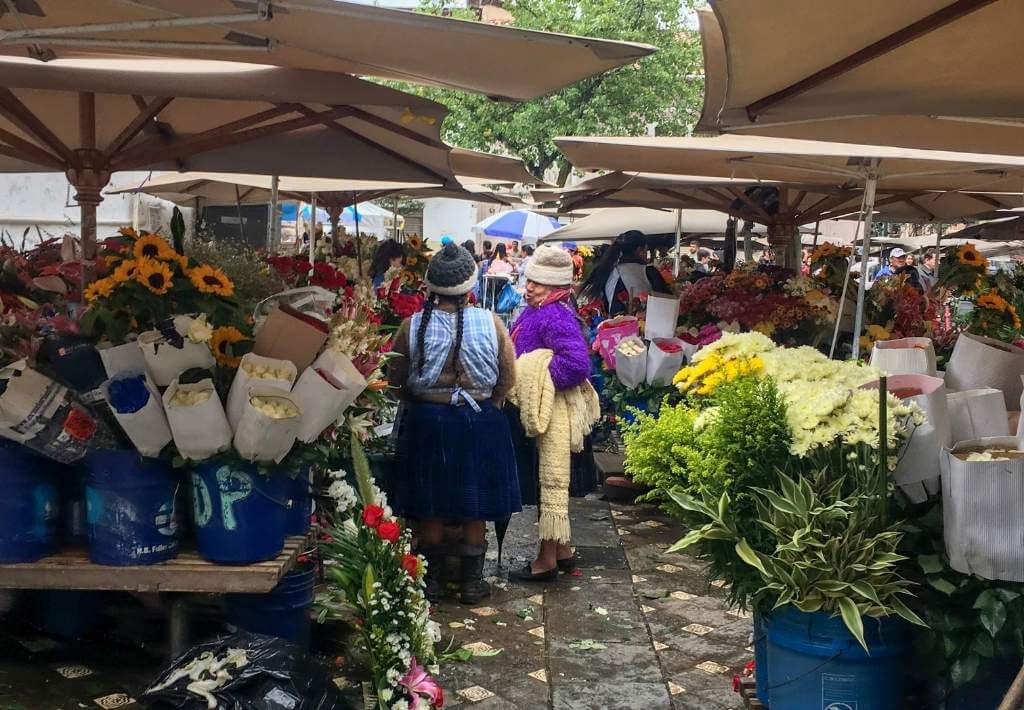 A little known fact is that Ecuador is the third-largest flower exporter in the world. Cuenca has a large flower market located next to the New Cathedral called Mercado de las Flores. There are dozens of vendors that lined up in front of the cathedral selling flowers—including high-quality roses. This is a great activity to do before or after visiting one of the surrounding cathedrals in the area. 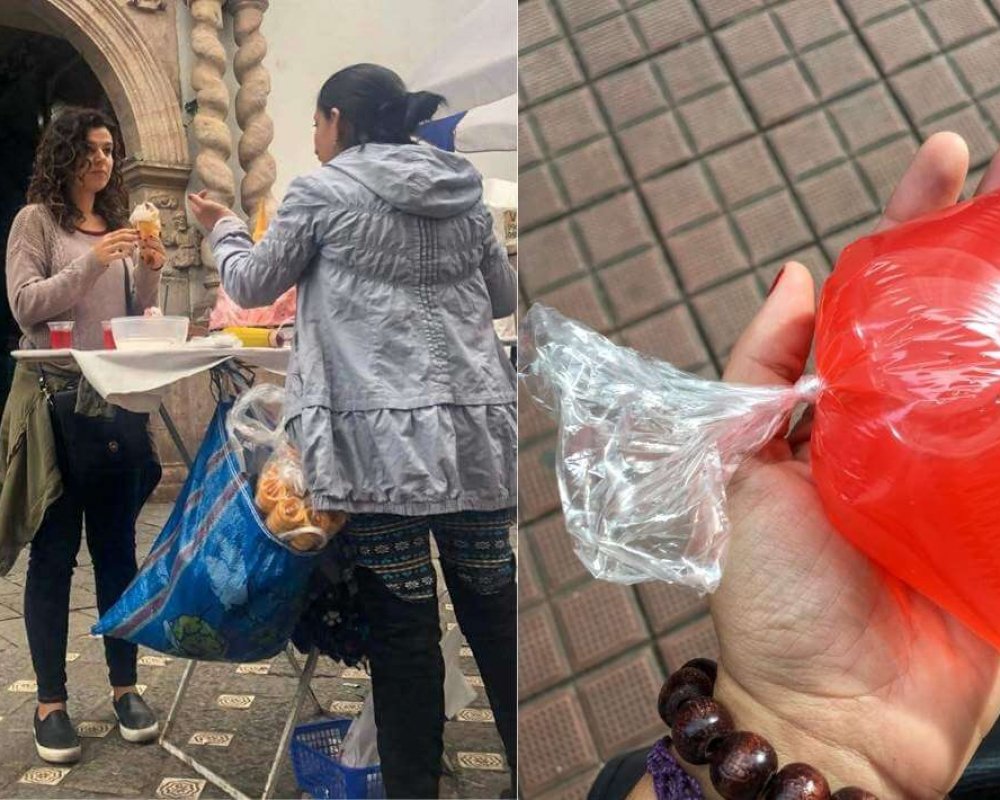 A post about the things to do in Cuenca, Ecuador wouldn’t be complete without a suggestion to try the local cuisine. I was just as surprised by the food in Ecuador as I was with the city itself—it’s delicious! Here are a few staple Ecuadorian foods & drinks that I recommend.
MONEY SAVING TIP!: When you’re at a local Ecuadorian restaurant, ask if they have a menu del dia—these are select meals of the day at lower than the norm prices.
And, not Ecuadorian but the pizza was phenomenal in Ecuador! They sell $1 slices on the street. Delicious! If you’re a pizza lover like me, try it out.

10. Take a Day trip from Cuenca to Cajas National Park 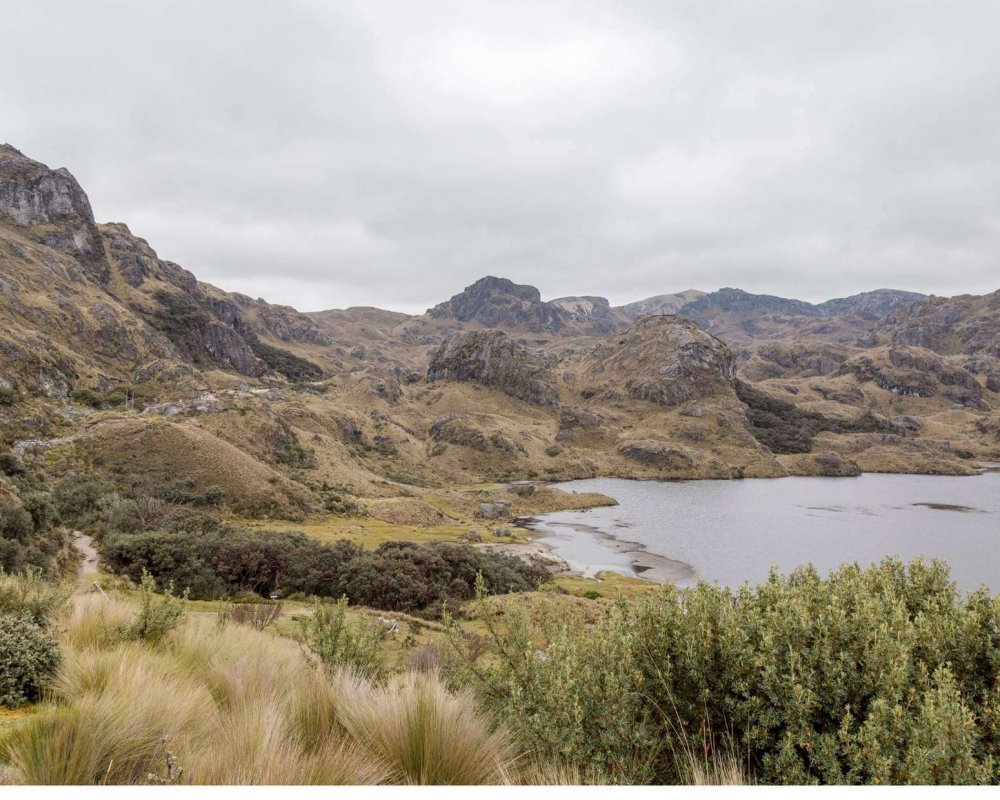 Cajas National Park is located 28KM from Cuenca, which amounts to a 1-hour drive to/from the city. The park is a breath of fresh air away from the city life. At the park, visitors can hike through Andean lakes and waterfalls. Visitors can either hike the park and return to the city of Cuenca within the same day, or camp at the National Park overnight.

There are several tours that leave from the Cuenca Historical District for day trips to/from the city. To find a tour, walk into one of the tourist offices near Parque Calderon and ask for information—they’re usually able to book you on a tour on the same day that you inquire barring the timing of your request.

Enjoy your time in Cuenca, Ecuador!

These are just a few of the best things to do in Cuenca, Ecuador. My trip was about three days long, and I was thankfully able to do a lot while during my time there. I loved the city so much, that I’d like to return one day and explore more. If you participate in any of these activities during your time in Cuenca, I hope that you enjoy!

6 thoughts on “Things to See, Do & Eat in Cuenca, Ecuador”